.....definitely yes, according to Dr Louise Firth of the University of Plymouth (not to mention Charles Darwin, of course).

Louise was referring to the marine Sabellaria alveolata worms and their reef-building, and gave Coastwise members a very informative view of the worms and their ecological relevance.

Her background is marine ecology, but she has studied S.alveolata in depth, and was able to cover the type of tube masses that are built, the way that they are built and how they survive and breed.

Although the amount of plastics in the oceans has become a major concern recently, as long ago as the 1982, a paper was published noting that plastic granules were incorporated in the mucous-glued tubes in the N.Somerset coast.

S.alveolata is very picky as regards sea temperature, and suffered a major setback in the bad winter of 1963. It was observed that it took at least 40years for them to re-establish themselves to previous levels.

Louise's in-depth study of the species in Ireland shed a very interesting light on the locl factors that affect their presence; these are a very specific amount of waves, not too much and not too little, tidal amplitude, suitable thermal stratification of the water, and the correct substrata, which must be rocky.

Why care about the species ? It forms habitats for a wide variety of other species, both epibiotic and infaunal, the tubes provide a refuge for algae from grazing, they provide water biofiltration, and the reefs can provide coastal protection.

Coastwise members learned a lot about this important but under-recognised species. See Louise's talk on the YouTube video :- 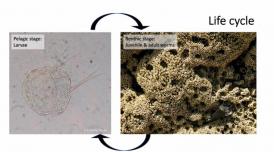 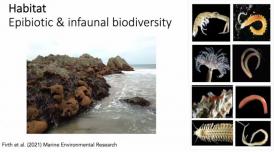 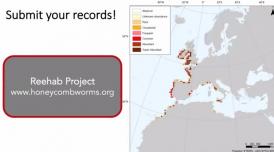