When she retired as head of the North Devon AONB, Linda Blanchard clearly had no intentions of disappearing from public life. Among other pursuits, she is a Trustee for the Museum of Barnstaple and North Devon which is getting close to its target for building the new Long Bridge Wing.  Coastwise's interest (besides the rest of the museum !) is that the new wing will include an upgrade and relocation of the Undersea World gallery.

Barnstaple has  a great museum which is one of the top 25 tourist attractions in the South West but it is bursting at the seams.  There is an extensive Social History Collection most of which is in inadequate storage and nowhere to display it.  There are masses of archaeological artefacts and again not enough room.  There is no meeting/education room, the cafe has no running water and there is just one public loo.

The Long Bridge wing will sort out all these problems.   The project cost is around £1.8 million and  generous funding from Heritage Lottery, Coastal Communities Fund, North Devon Council and several other charitable foundations has been received.  Local business and family trusts are also donating smaller sums of up to £5000. The funding gap is about £72,000 and the Trustees are are waiting to hear about a grant of £40,000 in May.  Other grant applications are being prepared. 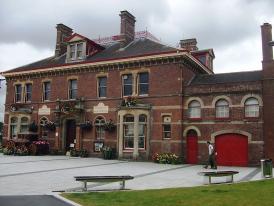