Mike has been working with the Marine Biological Association on barnacles and their identification, and the reason for his frustration is that there are many different varieties - it is thought over 1000 worldwide - and identifying them requires noting tiny differences.

Barnacles have been around a long time; they have been found in the Burgess Shales of British Columbia, laid down 500M years ago.

Until the mid-1800s they were classified as molluscs, but are now known to be crustaceans, with a larval stages as plankton.

Thompson in 1830 -1836 observed cirripedia settlement and metamorphosis and discovered their free swimming larvae and linked their development to the Crustacea.

However, Charles Darwin  in 1851 and 1854 and with notes from the Beagle voyage of 1835 to Chile, brought together earlier naturalist's observations of morphology and larval stages to show that they are in fact crustaceans.
His taxonomic classification is still used as standard today and the common non native barnacle Austrominius modestus  is known as Darwin’s barnacle.

The structure is simple (pictured R). Strong muscles operate the tergum and scutum plates, through which emerge the cirri fans which sweep food particles such as plankton into the mouth. Barnacles are hermaphrodites and the penis emeges through the same orifice, but the barnacle is also able to broadcast sperm if no suitable mates are close by. The fertilised eggs go through several stages of pelagic development as naupili, and then settle as cyprids to develop into a juvenile, during which time they are mobile on the rocks or other settlement locations.

Mike gave an excellent talk on a little-known area of marine life, and Coastwise members will look more carefully at barnacles from now on during beach visits ! 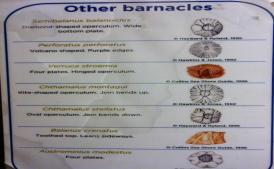 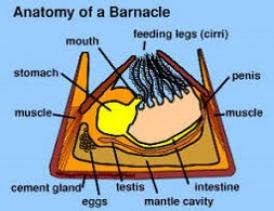