Bideford’s not all at sea…..it has a well-defined place in marine history !

A local historian  gave Coastwise members a comprehensive overview of Bideford’s marine connections, starting with a survey of the estuary with its two ‘pills’, or side valleys. Peter Christie has a long history of civic service to Bideford, in a number of posts, including Mayor and Councillor, and he is also a very knowledgeable historian, with several books to his name.

The first historical mention of the town is in the Domesday Book, which records a very valuable fishery yielding 25s per annum, a huge sum then. This was owned by Queen Matilda, Wliiiam the Conqueror’s wife. This fishery was then held by the Grenville family from the 12th to the 18th Centuries. Sir Richard Grenville was the captain of the Mary Rose when it sank in Portsmouth Harbour, to be raised again in 1982.

The town has several features showing its maritime history. The wide High Street abuts The Quay, and was the site of Bideford Market. A Tome Stone, used for sealing a bargain in the manner of ‘paying on the nail’ in Bristol, is embedded in a wall on the corner of The Quay. The Quay has been significantly widened in recent years (R, top)

In 1588, the first British colony in North America, composed of about 80 people, was founded from Bideford in Roanoke.  Unfortunately, when a follow-up expedition was despatched ten years later, no trace of the settlement or its inhabitants could be found, and it is supposed that it was absorbed into the local native American population after facing survival problems.

The  marine importance of the town was demonstrated when it sent 5 ships to join the fleet to fight the Spanish Armada in 1588.

In the 17th and 18th Centuries, wool, coal and tobacco became staples of marine trade from the town. There was also a significant shipbuilding industry. The ships were not large, but regarded as well-built (R, 2nd from top).

Remnants of this trading past are still visible in the form of old warehouses, now adapted to new uses. There is also a line of cellars under the modern Police Station which held coal for bunkering ships in the port. The houses of wealthy merchants are still visible in streets near The Quay.

By 1855, the railway had arrived, and, with the Rev Charles Kingsley’s best-seller ‘Westward Ho!’, was the basis of the tourist industry. Kingsley only lived in the town for a year, but he had a huge impact and a statue was put up in his memory by public subscription in 1906.

In 1871 the Port was downgraded to ’Creek’ status, which was a huge blow to the status of the town. It was not until a local man, William Reardon Smith, accumulated a large fleet of merchant ships registered in Bideford, that the Port status was regained in 1928.

In more modern times, reduced versions of these past industries have existed until comparatively recently. Clay and wood was exported in Russian ships, and Blackmoor’s Boatbuilding Yard made fast motor cruisers, which were exported from the town by rail. Gravel barges were also operating in the estuary until the 1960s (R, 3rd from top).

A monumnet to the town's history on The Quay has been enhanced with ceramic tablets, by Maggie Curtis Ceramics, illustrating themes from the town history (R, 4th from top).

This wa a fascinating insight into the way the sea has influenced Bideford life over the sweep of history in the last millennium. 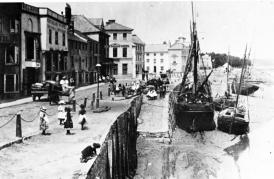 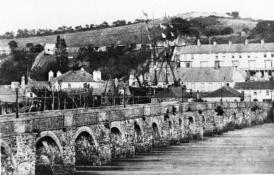 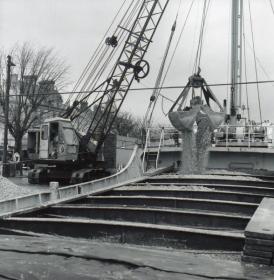 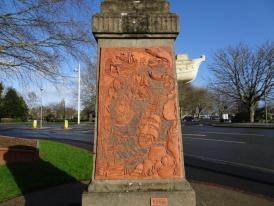