Dr Luiza Borges gave us the first ever Zoom talk from mainland Europe on 'boring marine organisms'. Most of us have seen 'shipworm' holes in driftwood without understanding why they were there. Only a few will know they are caused not only by marine molluscs but also by crustacea.
Drawing us easily into the discussion about what made the holes and what the molluscs looked like, we learnt about their boring lifecycle and reproduction. Problems of identification at the species level using morphological characters led her into studying their DNA and genetic markers. The science here began to get serious and terms such as the marine barcode of life appeared. Her studies reported new sequence data from shipworm species rafted from the western to eastern Pacific Ocean in woody marine debris resulting from the Japanese tsunami of 2011. Eight species of shipworms were found in this debris. Two closely related Psiloteredo species from the Pacific and Atlantic had a common ancestor 5 million year ago. Their subsequent evolution probably relates to opening of the Bering Strait at that time.
Dr Borges is to be congratulated on her excellent talk about a seemingly 'boring' topic. For copyright issues we are unable to present a downloadable video of the session. 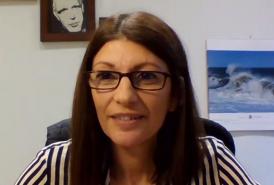 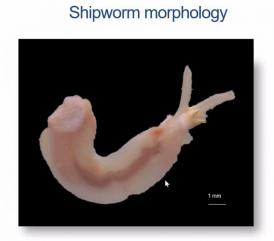