Coastwise members reviewed the results of the previous day's census at Saunton sands.

The hardy Coastwise stormtroopers had hit Saunton beach hard (well, actually quite sensibly, really, and after a briefing on the local geology by resident expert Dr Stan Coates, late of the British Geological Survey)  on 19th February to carry out an iRecord census.

At this stage of the year, it's really a matter of recording what's there rather than finding unusual flora and fauna, but there was plenty to keep people interested.

Several whelks were out and acting very strangely, and most members had never seen out of its' shell and showing sensory horns (pictured R).

There were several Pacific Oysters, and excellent Sabellaria formations. Unusually, there were few anemones, other than Beadlets, and the picture (R) shows the 'beadlets' themselves, known as acrohagi, which are used in internecine warfare.

Members saw Scallop fishing by hand (diver-selected), the Fisheries Observer, and The Fisherman Chef (R). All these addressed the issues of conservation of stocks by appropriate fishing methods, and how quota restrictions and the introduction of the no-discards policy will affect fishers. 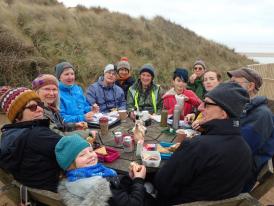 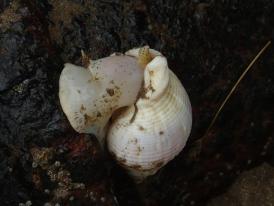