Character of the Coast....Dave Edgecombe

The AONB is taking a new approach to its North Devon area, with much more focus on seascape and the coast, and it is undertaking a project to assess the coastal character changes since its inception in 1960.

The methodology adopted is to use the rich archives of photgraphs available, such as the James Ravilious collection curated by Beaford Arts, and the Frith collection.

This assessment is being undertaken by long-time AONB employee Dave Edgcombe, who has re-photographed some of these pictures after careful research, and in some cases serious scrub-bashing ! Older maps from 1880, 1905 and 1950 were used to show recorded changes to the natural and built environments and help reconcile the modern phots to their predecessors.

He has also established some fixed locations for the "Fixed Post Photography Project" - taking a panorama using several images digitally combined to record changes at a location.

For Coastwise members, Dave covered a number of well-loved locations. Hartland appears virtually unchanged over 100 years. At Mouthmill, the landscape has changed with extensive new vegation due to reduced grazing, but the coast is unchanged.

At Clovelly, there are very few changes to the visual appearance, although the social environment is very different. Views of Westward Ho! show the changes in alignment of the Pebble Ridge, and walls for sea defence.

On the North side of the Estuary, some changes are more dramatic. The Braunton lifeboat station, manned by Appledore staff who rowed across, has totally disappeared, as has the Lighhouse, which could be moved on rails to reflect the movements in the sand bar.

More recently, the WW2 structures near the Saunton Sands Hotel built for D-Day invasion training have been removed. The sand dunes appear to have retreated some 60m, and Croyde dunes have also retreated and reduced in height.

A more dramatic cahned further East is the loss of Combe Martin's capability to be a port. Quite apart from the economic changes that have rendered local coast ports less viable, debris from a major nearby landslip in 1916 caused the beach to rise significantly, reducing the water depth necessary for ships to approach the town.

Pictured R courtesy of Dave, the AONB and Beaford Collection, the fixed-post photography project, the cliffs W of Hartland, and Clovelly in 1885 and 2016 - 130 years difference and only the boats changed ! 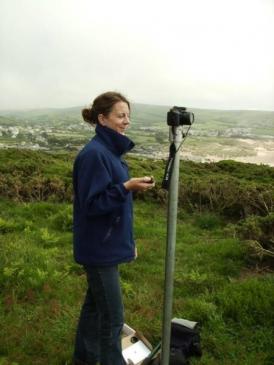 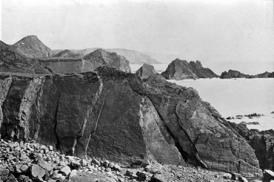 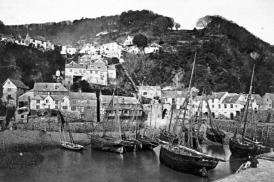 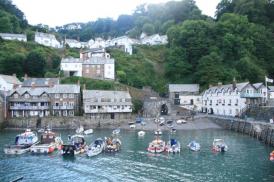