Coastal and Intertidal Zone Archaeology Network is a bit of a mouthful, but Alex Bellisario explained what the project is all about to Coastwise members.

The aim is to record disappearing coastal archaeology, and the need was recognised after the 2013/4 winter storms, when significant coastal erosion caused the loss of both ancient and modern assets.

This is a well-organised initiative, funded by a number of bodies such as the HLF, Historic England, Crown Estates, and the National Trust, and hosted by Museum of London Archaeology (MOLA).

It has 6 staff spread between York, Portsmouth and London, and has recruited 1900 local surveyors.

The methodology relies on trained local enthusiasts using their local knowledge, and acting as surveyors with standardised record sheets.

Alex illustrated a number of case studies in the SW area to demonstrate the scope of interest, from a prehistoric submerged forest at Porlock, to a disintegrating Second World War minesweeper in Chichester Harbour.

The Porlock forest involved mapping the tree stumps as successive gales moved the sand covering them, while the WW2 minesweeper needed recording by photo, sketch and measurement (pictured R).

Techniques such as compiling 3D images from a number of photos, using computers, are used to provide comparative views over time to show up erosion and damage to features (pictured R).

A chance find can lead to a much bigger discovery. Shards of Roman pottery which were assembled into part of a complete pot (Pictured R) led to a large roman site in the area, previously unknown.

Alex has probably recruited more surveyors from Coastwise ranks as a result of her enthusiastic and very interesting presentation. 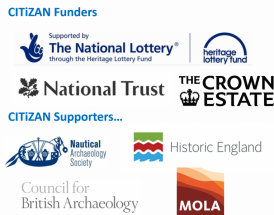 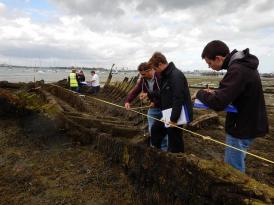 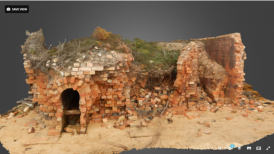 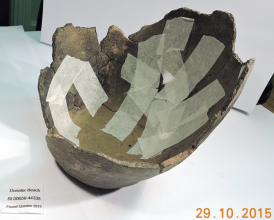