Cold Comfort on the Coast.....

.......is afforded to marine biologist and author Julie Hatcher by the drysuit she uses when diving in winter, so she adds a battery-powered vest underneath....very sensible !

Julie showed pictures of Bobtailed Squid (pictured R), a cephalopod called the Little Cuttlefish, although it's in a taxonomic group of its own. Squids have a soft skin that's susceptible to damage, so they tend to be very cautious of potential predators, although attracted to the diver's lights. Common squid are difficult to photograph, but can be 15-40cm long.

Bubble Snails (pictured R) are only seen in winter , usually in seagrass, with their egg masses, but not in N Devon so far. They move on a layer of mucus which seems to travel round them like a tank track.

Peacock Worms (picture R) are very colourfuls, common and easy to see at night. They can be up to 30cm long in their burrows, and the case, which is made of mucus, mud and sand can stand up to 10cm proud of the sea bed.

Pictures by courtesy of Julie and Steve Hatcher. 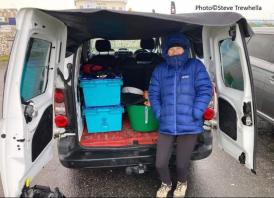 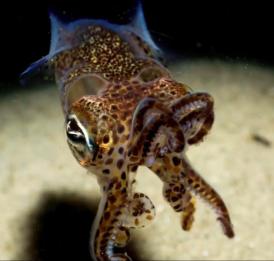 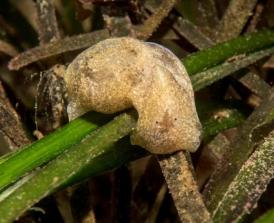