Did the Porpoise hear the one about……

The effect on marine life of too much sound ? Well, maybe not, but Coastwise members heard John Harwood, a semi-retired Professor of Biology at St Andrew’s University, give an overview of his research into the topic.

The basic issue is that water does not transmit light well, but sound does travel very well in water, so it is the primary sensory input for many marine animals, and they can be adversely affected if there is too much sound energy in the water.

The effects can include hearing damage, behavioural changes, stress and interference with hunting and mating activities

The stress from marine noise such as shipping has been demonstrated, as analysis of porpoise excrement before and after the New York 9/11 attacks showed significantly reduced stress hormones in the days after due to very low shipping activity.

Beaked whales (picture R, courtesy of Diane Claridge, Tim Melling) have been extensively studied using acoustic recording tags (Developed by Mark Johnson  WHOI & University of St Andrews) attached with sucker cups (picture R, courtesy of BMMRO) that self-release after a day. The whales have an unusual life in that they feed at great depth, up to 3000m, and then come to the surface to do a number of much shallower dives to decompress and avoid the bends, although autopsies indicate that all show some signs of embolisms.

A pattern of shallower dives, probably ineffective in avoiding the bends, was noticed in noisy areas such as naval exercises, probably due to a wish to go to depth again to avoid noise. Disrupted patterns of births have also been noted.

As a result the US Navy reduced its use of powerful sonar and avoided shallow ocean areas where sound energy is not dissipated quickly.

John also covered wind farms and their associated installation impacts, such as piling. There is some impact on bird populations, but the noise of piling has a bigger impact on fish, mammals and cetaceans. Research shows that feeding patterns of seals are affected (picture R, before and during construction), but it has also been shown that alleviation measures like bubble curtains can reduce the impact of piling noise.

Overall, a very interesting a though-provoking talk from someone at the heart of research on this topic. 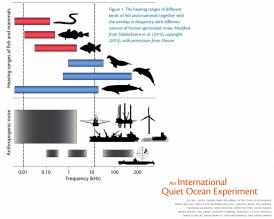 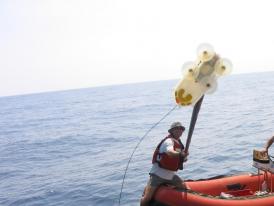 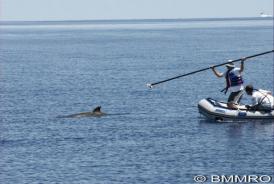 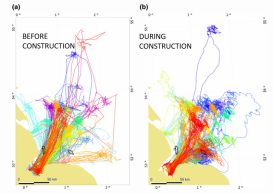