From foraminifera to poetry via elephant fish......

These always provides a good variety, but the latest was really eclectic.

Stan explained how his curiosity about the composition of sand led to an investigation of local foraminifera, or the tiny cases, or tests, of animals, technically a phylum or class of amoeboid protists characterized by streaming granular ectoplasm for catching food and other uses. Cases are covered in tiny holes through which the streaming 'arms' protrude. Stan also described a variety that has agglutinated cases, cemented sand grains, similar to caddis fly larvae and sabillaria worms.

Turning to local history, Ray outlined the astonishing history of one of the wrecks on the shore of the Torridge, The Haldon started life in the 1880s with wood from Haldon Forest following a huge storm which destroyed many trees. It survived as a working boat, including a refit which changed the two ketch masts to a three-masted schooner, until the second world war. By various subterfuges it's owners eluded War Department requisition, and it was sold to a norwegian, where the hull was stripped, fitted with a motor and prop, and a large superstructure, and contined working.

Jay described some of his beach finds from trips to family in Australia - all strange to European eyes, and including the cases of elephant fish, an ancestor of the shark.

Drawing on his work at the Maritime Museum in Appledore, Martin described the work of Vernon Boyle, and artist and environmentalist who painted local scenes.

Members heard about the marine life and geology of Kennack Sands in the Lizard Peninsula, and local seal poulations.

To finish, Marion read a poem she'd composed celebrating a new variety of sea slug found by Janice near Ilfracombe, that has finished its life preserved in formalin, and now in Russia for DNA identification and naming ! 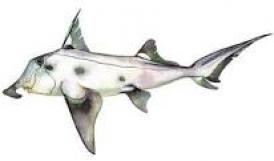 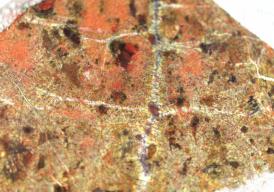