......were explored by Dr Keith Hiscock, as he gave Coastwise members a preview of his new book "Exploring Britain's Hidden World - A Natural History of Seabed Habitats"

This draws on Keith's extensive knowledge of the marine world, and starts with an appreciation of the history of undersea science so far, before covering the subsea environment and habitats and moving on to what is changing and where we go from here.

Early undersea exploration was carried out using remote grabs and suction sampling, and concerned itself with identifying new species rather than understanding the habitat. All this changed with WW2, and the military development of subsea breathing apparatus, which found its way into civilian life post-war, and allowed much more sympathetic means of gathering samples and observing the underwater environment.

Keith's own journey started with a degree in marine science, followed by a PhD on the effects of water movement on the sub-littoral fauna, where he was able to use his new-found interest in SCUBA diving. Roles in the Oil Pollution Research Institute and the Nature Conservancy Council followed, and laid the foundations for Keith's current status as one of the elder statesmen in the world of marine science.

His new book covers all Britains waters, and he has dived in locations as diverse off Rockall, 306Km W of St Kilda, the Bishop Rock off SW England, and offshore E Anglia, and a lot of places in between, including Scottish sea lochs, voes and rias, which have their own special characteristics and environments.

For student readers, the book covers the marine environment, ecosystems and habitats, including zonation due to light, depth and salinity

Keith's talk covered some of the personal story behind the book, with his involvement in the establishment of the Marine Protected Area around Lundy islang in the 1970s (top R, early diving expedition at the island). A previously unknown species, the Red Banded fish, was observed  here by Keith, and subsequently studied extensively by others at a more prolific habitat in Plymouth Sound (R, 2nd from top). Another discovery by him was the False Cowrie, named Simnia hiscocki after him (R, 3rd from top).

Keith rounded out the talk with an overview of the change that is occurring for various reasons, methods of safeguarding the status quo with, e.g. Marine Protected Areas, and new techniques, such as Multibeam Sonar imaging (R, 4th from top), which enables interesting habitats to be located before diving, thus maximising useful time underwater. 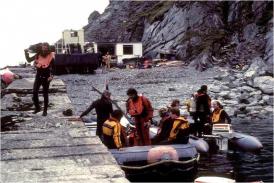 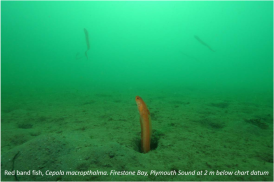 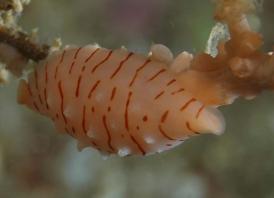 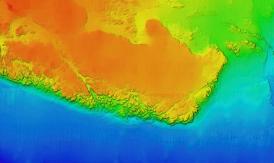