The 2017 member's session yielded its usual rich harvest of talent and inspiration.

Cat Oliver, AONB Coastal Creatures Project Officer, gave a harrowing account of trying to live plastic-free for a month. Because of the near-universal use of plastic packaging for food, cosmetics and bathroom items, Cat had to put up with hardships such as "disgusting" clay-based toothpaste, and search for shops that sell loose products. Coastwise members applauded the considerable determination that Cat demonstrated.

Shooey McCall, a WI member, defied harvest festival convention by assembling a plastic "harvest of the sea" to demonstrate the dangers of our way of life to the planet. Despite fears that she'd offended delicate WI sensibilities, her exhibit was commended by the judge for showing what a danger discarded plastics are. Shooey read members the accompanying witty and entertaining couplet poem.

Tony Bown investigated the mystery of mass strandings of small octopi in SW Wales, and after sifting all the theories came to his own conclusion that the most likely explanation was some form of poisoning by sewage or phytoplankton.

Hilary and Martin Corfe gave an account of their own encounters with marine plastic waste, but showed an inspiring idea from their travels. In Northern Australia plastic waste is a huge problem, with an estimated 3Te/Km of coast. Dedicated coastal groups have received funding to clear and use this, and Hilary and Martin showed how rope is reduced to art materials by fibre artists, and transformed into a wide variety of marine animal sculptures.

Chris Mandry stayed above water without his SCUBA equipment to show an attempt to survey in detail one of the Taw Estuary historic fish weirs. Unfotunately, a local institution had lost the data no, so Chris was extending an open invitation to anyone to get their wellies muddy and their hands wets, and re-survey the feature !

Robert Down covered some aspects of the Lee Bay Bioblitz for those members that could not get to it, or wisely decided that rockpooling at 0300hrs was not for rational citizens.

Pictures from Top, (with credits) :-

Torres Straits islanders creating artist's materials, and an example of the art (Hilary and Martin Corfe) 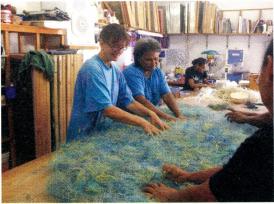 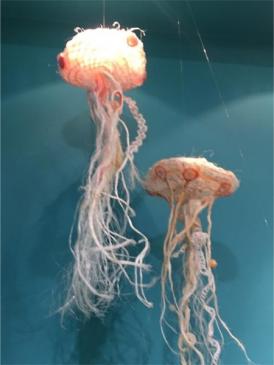 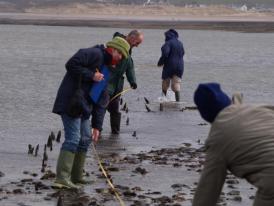 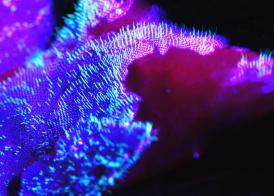 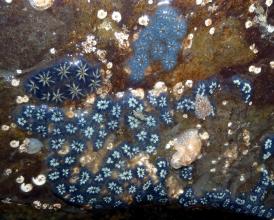 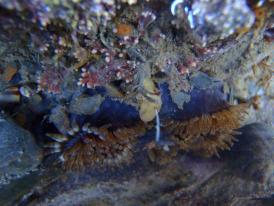