Coastwise members are suckers for a good underwater film, and Tom Daguerre (yes, he really is a descendent of the pioneer of photography) definitely obliged.
One has to say that the film is really a great deal better than the definitely non-snappy title “MCZ: The Marine Life of Newquay and The Gannel”, although “Newquay Down Under” probably wouldn’t have been too good either.
Tom and a colleague set up Hydro Motion Media as a community interest company, and attracted funding from a wide variety of sources with an interest in the marine environment to make a film. This communicates his love of the area and the marine world to people who otherwise would have no idea of the magic beneath the waves.
The Marine Conservation Zone of the title runs from Kelsey Head to Trevelgue Headland near Porth, and 5 miles out to sea, and has lovely locations ranging from the Gannel, an estuary, to headlands and inaccessible coves.
Tom’s film is compiled from many sources, including a variety of underwater cameramen and cameras, surface filming and a drone-held camera. He’s used macro and time-lapse techniques to show the activity of animals which normally move very slowly. The film itself has no voice-over, just well-matched music, and takes the viewer on a journey over and under the sea, with a short scene-by-scene programme to guide them. This, with the beauty of the locations, gives the film an ethereal quality.
Content includes a variety of locations and marine life; the giant goby, Devonshire cup corals, hydroids, nudibranchs, dolphins, spiny starfish, St Piran’s Crab, squat lobster, anenomes and a jellyfish.
This was the first public showing, and Tom plans to add to its 24-minute length.

Coastwise members  were entranced by the quality of the content and filming, and after discussion felt that future development could profitably include an occasional sensitive commentary to introduce locations and identify marine life. 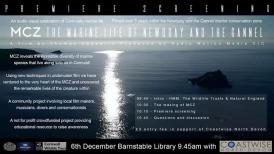 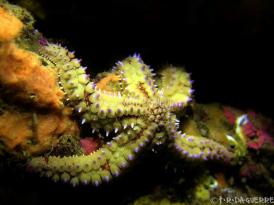 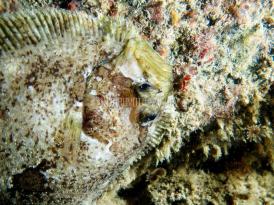