.......is a way to understand what new species are arriving on our shores.

This new survey process which started last year is carried out twice yearly at two beaches: Westward Ho! and Lee Bay. It takes place over two hours, either side of low tide, and aims to survey the two beaches for INNS - Invasive Non-Native Species. It came about because Pip Jollands, who had been leading the Shore Thing surveys twice yearly at Abbotsham and Lee Bay for the last 12 years, realised the time had come to survey additional invasive species which were becoming more common in other areas. She asked Nicola Mello, who had just stepped down as Coastwise chair, if she was interested in setting up a new survey and with the expert help of Liesje Birchenough grants were successfully applied for from the AONB North Devon and the Tarka Country Trust and then carefully managed through Coastwise North Devon by Robert Down.

A training day was set up with Jack Sewell from the MBA at Lee Bay and enthusiastically attended by members of Coastwise and others. Jack brought live and pickled specimens of the selected 29 species (some much easier to identify that others!), lots of species ID information and arranged a trip to the shore. Two pilot surveys carried out last May with members of Coastwise.  We then tweaked the methodology and the first two surveys proper were carried out at Lee Bay in glorious sunshine on 30th September and then in the pouring rain at Westward Ho! on 1st October.  Chris Wood and John Bishop from the MBA offered to be mentors as they were carrying out INNShore surveys for the MBA and they carried out their own INNShore survey alongside us on the May pilot survey. The results were interesting: Caulacanthus okamurae (Pom-pom weed) and Austrominius modestus (Darwin’s barnacle) were common on both beaches; Sargassum muticum (Wire weed) was common at Lee Bay but rare at Westward Ho!; and Magallana gigas (Pacific oyster) was rare at W Ho! and absent at Lee Bay. Realising that positive ID of Pacific oysters was problematic, another training day was arranged with Nigel Mortimer (from South Devon AONB) this February and ten Pacific oysters were found and dispatched at Westward Ho!

As with all events there will be no surveys this May but we are hoping by September we will be able to run the autumn surveys to which all are invited, regardless of whether they attended the training day last year. 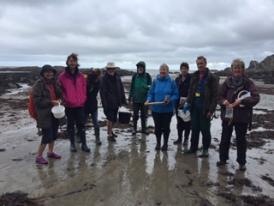