of geological time is the way Dr Jenny Bennett describes her particular interest in the last 2.7M years - the Quarternary Period.

This period held the latest of a long line of glaciations, and has shaped the landscape that surrounds us.

We see the evidence around us, particularly when exposed in sea cliffs and river banks. Large cobbles may be evidence of raised beaches when sea levels were higher in warmer phases of earth's history.

Pictured Top R is Westward Ho! with its higher beach level from the past, topped with cobbles; the late Dr Chris Cornford, an expert on the geology of the area, is in the foreground. In the same locality there is evidence of much higher beach levels, consistent with little ice on earth, and evidence such as sunken forests (R, 2n from Top), showing lower sea levels consistent with colder conditions and a lot more glaciation.

There is also evidence of the cold associated with recent glaciations. R, 4th from top shows, where freeze-expansion has caused the shattered shale to "boil up" through the top layer.

The suspected presence of a glacier snout abutting the N Devon coast appears to have caused rivers flowing off Exmoor to divert westwards, and (R, 3rd from Top) the Valley of Rocks is thought to be the diverted path of what is currently the River Lyn.

Overall this wa sa fascinating explanation of the more recent geological past, and an ecouragment to look more closely at near-surface features and try and interpret them. 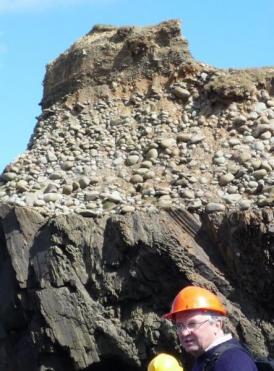 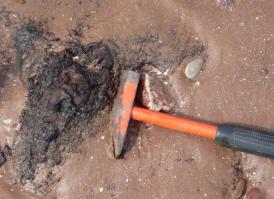 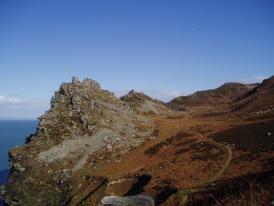 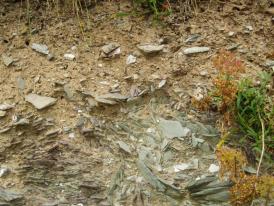