....but not for the Reverend Hudson Heaven (see below !).

Coastwise members had a virtual trip round the island courtesy of Glenys Beardsley, who used her own experiences, and skillfully drew out those of other members who had visited, to make a good advertisement for a visit for those who haven't been.

Firstly, a brief history lesson, as the current state of the island is heavily influenced by it's strange background. William Hudson Heaven owned plantations in Jamaica at the time slavery was abolished.  He had always wanted to own an island and used his compensation to buy Lundy as a family summer retreat.  Even before the deeds were transferred in 1836, he had begun work on the family residence-to-be, The Villa. He had the road up from the beach constructed, began renovation of the farm buildings and built cottages in the castle courtyard for the labourers. Unfortunately by 1840 Heaven’s finances had taken a downward turn.  His attempt to sell the Island had no takers and so Lundy became the family’s permanent home. In 1863 the newly-formed Lundy Granite Company agreed to lease the Island for an annual rent of £500 plus royalties for the granite quarried. The family kept possession of their southeast corner and the quarrying company, which employed over 200 men, embarked on an extensive building programme, but went into liquidation in 1868. William died in 1883 leaving the heavily-mortgaged estate to his son the Reverend  Hudson Grossett Heaven who struggled manfully with the Island for 33 years until his death in 1916, and his legacy is the church, St Helen’s, which he had constructed in 1897 following a family bequeathment. Lundy was sold in 1917 and is now under the management of the Landmark Trust.

Glenys' talk covered many of the features of the Heaven years via a virtual circular walk starting at the jetty where the Oldenberg ferry ship docks.

First building the visitor arrives at is Heaven's house, Melcombe House (Top R), and a clockwise circuit takes the walker round to the west side of the island, and the Upper Lighthouse (R, 2nd from top).

This was not thought out properly, and was frequently covered by fog, so a lower one at the NE end of the island was built later.

Carrying on above the high granite cliffs, the walker passes the Lower lighthouse and returns along the east coast, passing seabird roosts and a small copse where Glenys caught deer on camera, although you have to look carefully at the picture (R, 3rd from top). The circuit is completed, after passing one of the old granite quarries, by arriving at the small village, which has a shop, the Marisco Tavern, a campsite and the Fire Station (R, 4th from top).

A great reminiscence for those who had been to Lundy, and an incentive to those who haven't yet. 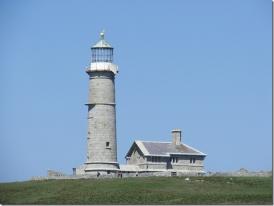 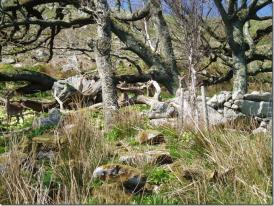 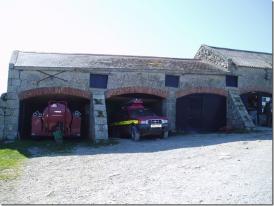