Migrant numbers in the news again.....

.....at Coastwise, with a masterly talk by resident ornithological expert Rob Jutsum.

Rob concentrated on the many local estuary waders, but first gave a general overview of the reasons for migration, and the general areas moved between.

Bird movements tend to be predictable, but knowledge of the phenomenon is comparatively recent, and as recently as 1822 it was believed by the scientific community that birds hibernated over winter. However, a bird was then shot in Germany that had a clearly African spear though its neck (pictured R), and it was realised that birds do travel huge distances.

The main drivers for migration are food sources, temperature and breeding safety. The UK happens to be a convenient stopping-off point between many migration destinations, with attractive conditions, both climatically and for feeding (see main Flyways R). There are, of course, risks - huge physical effort and energy output, poor weather, bad navigation, and predators, but the vast majority of migrants survive these, and migration is still clearly a good survival strategy.

A great deal of research has been done, using the results of observers and also with birds carrying transponders for satellite tracking. As a result mass movements are now well-understood, and with current climatalogical forecasts, the migrations of many species can be fairly accurately predicted.

Rob covered the movements of a wide range of species, including spoonbills (pictured R) and sanderlings (pictured R) [both photos courtesy of Rob Jutsum]. The latter breed in Alaska and Northern Russia, but use the UK to overwinter, although many continue on southwards to West and South Africa. This movement is typical of many of our migrants.

Remarkable for their length of migration, diminutive size and weight, and longvity are the Manx Shearwaters. The huge distances covered (shown R) to South America and back are about 10000Km each way, so in a 50-year life a bird may cover 0.5M km. There are approximately 300,000 breeding pairs in the UK, and Rob described how recent elimination of rats from Lundy has resulted in a boost to c. 3000 breeding pairs.

Rob left Coastwise members with a sense of wonder at the huge numbers and distances involved, and also a mystery - how do the birds navigate without maps and sat navs ? 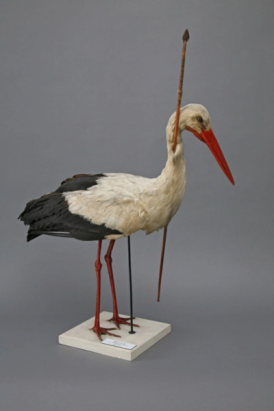 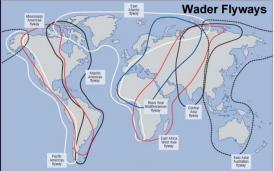 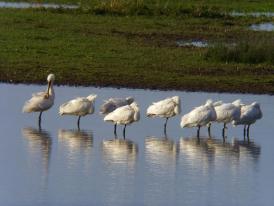 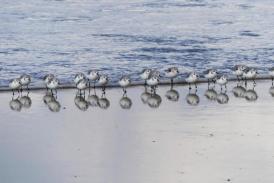 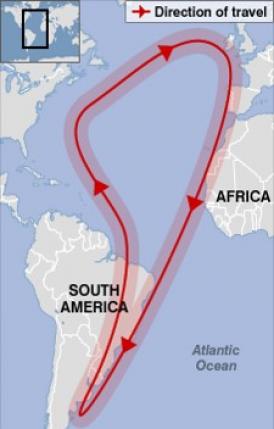