...are under threat, as expert birder and author Tim Jones spelt out to Coastwise members.

He has extensive knowledge of the WeBS surveys of the Taw and Torridge Estuaries, and used the data to show how many birds we get locally, and also how these patterns of movement fit into what is called the East Atlantic Flyaway, which runs from the Artic, through Europe and onto North and even South Africa.

The Taw/Torridge Estuaries are ranked 61st in more than 600 UK sites, and 40th in England. The top numbers of birds are represented by Black-Headed Gulls, followed by Lapwing and Golden Plover. These, and many others are declining, while the only species increasing are Canada Geese and Herring Gulls.

Many of these species are classiieid as 'at risk', including Dunlin, down by 68% in the last 10 years, and Curlew and Lapwing, down by 60%.

Tim covered thrests and pressures on the estaury and wetland birds, including destruction and degradation of breeding sites, stopover and wintering sites, climate change and human disturbance like dog-walking and water sports.

The highest counts for differing species occur in all months between February and November, so there is very little of the year when protection and conservation measures are not needed.

The link to the YouTube video of Tim's excellent talk is here :- 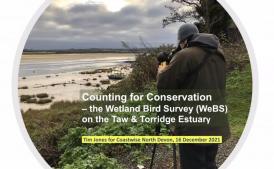 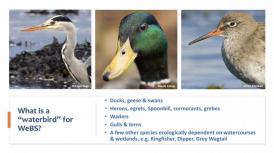 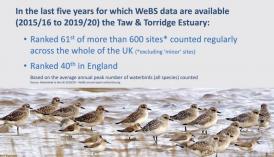 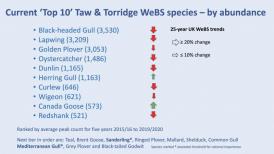 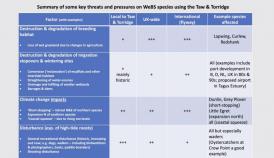