We've all tried to take good pictures of the wildlife that we see, but people have been doing this for over a century, and at the Coastwise meeting on 21 February, Jim Monroe gave us the fascinating history of  'Pioneers of Nature Photography'. This is a subject dear to Jim's heart as he first learned about it at the age of six when his grandfather introduced him to a classic book - British Birds' Nests (1895) by Richard Kearton, illustrated with photographs by his brother, Cherry Kearton. 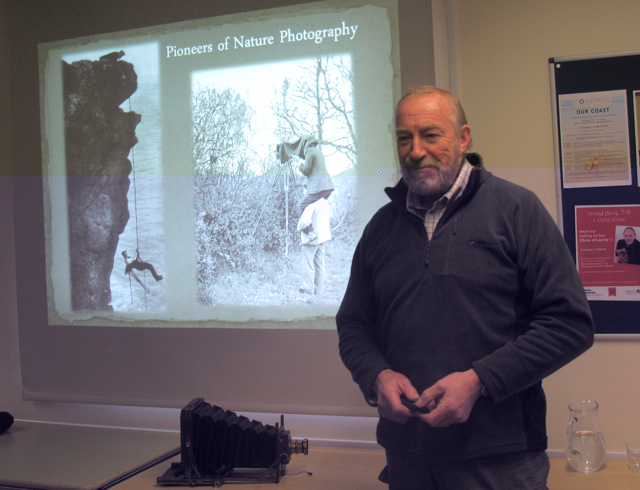 Before the Keartons revolutionised the subject, the Victorians had studied wild life by first shooting and stuffing their specimens. The Keartons were able to capture their subjects using cameras instead of rifles. They benefitted from the much faster negatives of their time (the gelatin dry plate process) but they still needed to be great innovators in creating hides, unknown before, and raising their cameras to the considerable heights (in trees) or depths (down cliff faces) sometimes required.

Jim's talk ranged over other pioneers, including Emma Turner: by the unsubtle means of kidnapping it to ensure it didn't fly away, and she could show it at her local pub (!), she photographed a young Bittern in 1911, even though this lovely bird had officially become extinct over 50 years earlier.

Among other great names covered by Jim's lively talk were R.B. Lodge, Eric Hosking, S. Vere Benson and Sir David Attenborough. As a boy, Attenborough saw a Cherry Kearton wild life film, which started him on his most distinguished career. After his talk, Jim described the Bioblitz due to take place at Woolacombe on 7 September, for which many volunteers will be needed to carry out a variety of tasks, from meeting and greeting to IT support.