Rose Roberts is an old friend of Coastwise since her days across the bay in Croyde where she was ranger for Ruda Holiday Park, and is a dedicated environmentalist, writer and blogger. Before her time at Croyde she was a National Trust Ranger in Bedfordshire, so she has a great deal of experience of the natural world.

The Country Park (NBCP) is common land, accessible to all, except for two fenced areas with sand dunes and the old landfill site. The defining feature is the Pebble Ridge, which has protected the low-lying land and has developed due to longshore drift from along the coast as far West as Hartland Quay, together with riverine deposits from the Torridge.

The Pebble Ridge has move significantly since 1861 - about 15m southwards - but has developed further since first descibed by Townsend Hall in 1865, when there was a lifeboat station out at the northern tip.

Landfill was stopped and capped in 1984, and soon after a visitor centre was built. This was due for replacement in 2020 with a very impressive design, but then the pandemic arrived, and building materials and labour became very scarce. A quick rethink and redesign to use the available funding in time resulted in a radical, but very attractive change, shown R.

The two rangers do a lot of visitor outreach in the summer, with 20-30 school trips and 1000 pupils per year as well as many other types of visitor groups such as mud-dipping groups, litter-pickers and the Marine Conservation Society with education groups (picured R). In winter the rangers do repairs, fencing, scrub and bramble -removal, and generally maintain the area.

The ecology is affected by the amount of salt landing on the area, with an estimate of about 50Kg/acre/yr, as well as seawater inundations.

As well as extensive birdlife and flora, there is a variety of other wildlife such as stoats, weasels, harvest mice, moles, rabbits, some bats, foxes, badger and the occasional seal pup.

The NBCP is a great local resource for wildlife, and is well looked after by its dedicated team.

A Youtube video of Rose's talk can be viewed here..... 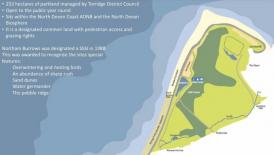 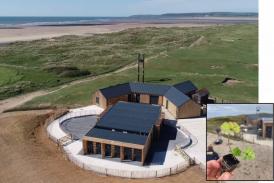 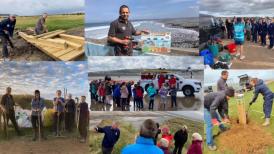 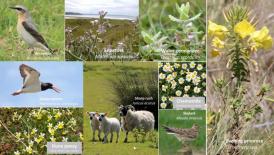