..........in areas run by the National Trust is something that all Coastwise members do.

To help us understand more of what goes on behind the scenes, Lead Beach Ranger at Croyde Holly Robertson and Assistant Ranger Fraser Goodfellow from Woolacombe explained to Coastwise members how they run their patches.

Holly explained how she and her staff look after Croyde, which is owned by Parkdean holiday camps, by providing beach services, conservation and habitat management, and community engagement. As well as the beach, Parkdean has a lot of the surrounding land, including wooded areas and lakes.

On the beach, they patrol, clean and litter pick, carry out repairs as necessary, and also work with other relevant bodies such as the RNLI, local councils, press and neighbours.

They monitor and survey the various marine and terrestrial habitats, and try and create new habitats such as wildflower banks, ponds, deadwood hedges and put up birdboxes.

Up the coast in the Woolacombe area, Fraser explained that his focus is more directed at the land around Morte Point and the dunes area betwee Woolacombe and Putsborough.

These areas, with extensive bramble and gorse overgrowth, require some management to expand the types of habitiat for various forms of wildlife.

The NT manages herds of Belted Galloway and Devon Ruby Red cattle, which carry collars which train them to remain within defined areas by wireless signals - a "virtual fence" - and which, together with some Exmoor Ponies, effectively keep the brambles and gorse down where needed.

In addition, Baggy has Hebridean sheep to graze the grass.

Holly and Fraser gave Coastwise members a fascinating view of what is a very sought-after job for many young people who want to work in the environmental world.

A YouTube video of the talk will be available here shortly...... 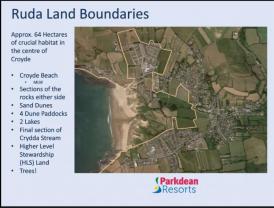 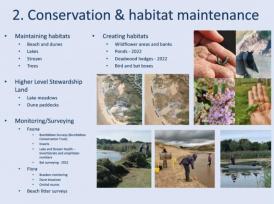 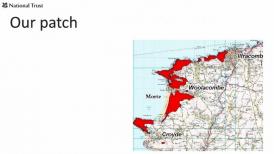 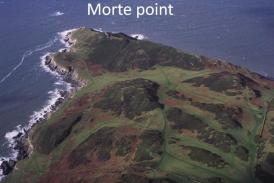 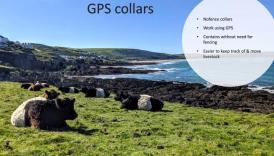