When Augustus M Toplady composed the hymn, he wasn't necessarily thinking of Lundy. However, Coastwise most members love the island, and Dr Stan Coats gave them a detailed history of its granite from its genesis about 58M years ago, to the modern day.

Stan, now a local resident and Coastwise member, is a real expert on the subject, after a PhD working on Galway granite and a 36-year career with the the British Geological Survey.

He outlined the geology of the Bristol Channel area (top, R), and the specifics of the Lundy granite, linking it to the geologically recent age of c. 60M years, rather than the 400M years of some Northern granites and the 309M years of Dartmoor, by virtue of unusual characteristics such as Topaz inclusions.

Why then does a lump of granite stick up in the middle of the Bristol Channel ? Mainly because it's hard and doesn't erode easily, but Stan explained that it probably resulted from a large intrusion of a basic rock, basalt,  to the West. This has been deduced from measuring the gravitational pull across the area, with a high-gravity anomaly interpreted as the basalt basolith. This is corroborated by the patterns of cracks, or dykes (middle, R) on Lundy, caused by thermally-induced stresses, indicating a heat source West of the island.

Dartmoor and other SW granites were intruded in a collision of tectonic plates, and Lundy’s rock characteristics indicate that it tapped some of the same Continental crust, but much later.

Members heard about the more recent history of glaciation (bottom, R), and how this can be approximately dated by measuring isotopes created by exposure to cosmic rays.

Stan then covered the history of quarrying the granite from the mid 1850s to the end of the 19th century, with a detailed look at the remaining buildings and features for extraction and export. 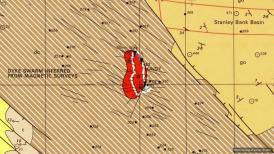 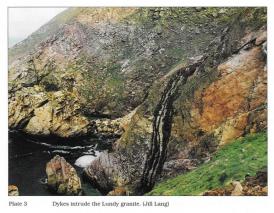 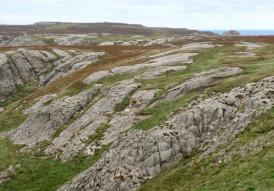