Not penguins, but a dozen coastwise members led a shore safari for the public at Westward Ho!  on May Bank Holiday Monday.

Our battle through the traffic and the hassles of parking were more than rewarded by the interest and enthusiasm of the dozen or so families and others who joined us.  Together we made the most of the fairly sparse marine life, not too surprising this early in the summer.

We scoured the mid shore rocks and boulder-strewn shallow pools of the lower shore for blennies and crabs. Plenty were found thanks to the hunting skills of the youngsters delighted to share their finds and learn more about their animals. They included a huge Common Blenny, probably the full 16cms, and the less common crested Montagu’s Blenny – shown here (R. - 3rd from top).

Even more unusual were the numerous clusters of pink Grey Sea Slug eggs.  They were all in the same area of the shore but however hard we looked no one could find any adults which are usually found near their eggs.

A tiny hermit crab found skulking in a keel worm tube no wider than a straw has been referred to experts for identification.

After a  couple of hours on the shore some of us went for a Hockings Ice Cream treat and saw some rock-hopping of a different order.

A national champion stunt bike racer was quietly testing his incredible skills on rocks at the top of the beach, not quite the Valley of the Rocks where he also practices, but still scary stuff brilliantly executed. 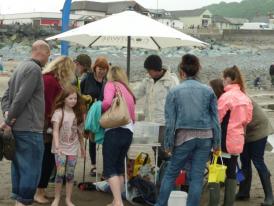 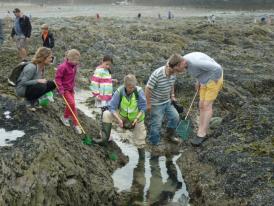 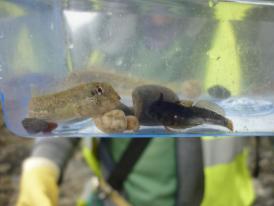 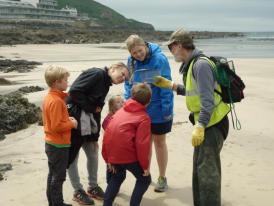