Professor Stephen Hawkins gave an inspirational talk on Zoom on the subject of Rocky Shores as experimental test sites and climate change indicators. Having such an eminent scientist talking about his observations and experiments over the past 40 years is one of the few bonuses of the current lockdown. He spent part of his childhood in Braunton so he is no stranger to the North Devon coast and the sight of his survey notebook drawn up on a field trip to Lundy in 1973 shows the value of such outdoor education. The intertidal zoning he saw there became a lifelong interest and the simple model of the physical and biological controls were shown to be much more complex by a range of experiments. For example, fencing off small squares of bare rock to prevent Limpet grazing showed that marine algae (seaweed) quickly regrew and the bare rock was not the result of different physical or chemical conditions. Increasingly more complex statistical experiments on rocky shores from the Isle of Man down to Portugal and Spain showed that they provide ideal test beds for intertidal ecology. His comparison between 'lab-rats' used in indoor laboratory experiments and rocky shores in outdoor studies was very apposite Long term monitoring of the intertidal shoreline has been carried out by the MBA for many decades and became poorly funded because it was not thought 'scientific' enough. However, the value of these studies has been shown in serious pollution studies like the Torrey Canyon disaster and also studying the effects of long-term climate change on coastal ecosystems, including the MBA’s MarClim project under the leadership of Professor Hawkins and others. Coastwise members are discussing how we can develop some systematic surveying which is why the talk has been so timely, and hopefully the talk will inspire Coastwise to develop its beach surveys.

To see the talk on Youtube visit the link at https://youtu.be/E8U1Axgo0BU 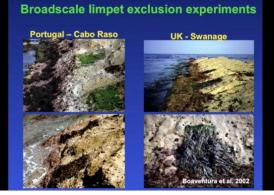