Seal the Marine Mammals around us.....

The south west is fortunate in its seals, home to a significant proportion of the UK’s globally important Atlantic Greys, and doubly fortunate in having Sue Sayer and the Cornish Seal Group she founded in 2000 to look after their interests.

No stranger to Coastwise, Sue came to talk to us and launch our autumn programme, enthralling us by her dedication to these wonderful animals.  She shared the knowledge she and fellow volunteers have gathered by painstaking observations and photo ID over many years.

What we learnt about seal behaviour and their life cycle included some surprises. Though much south west activity focuses on Cornwall they are really Celtic seals, their range includes Wales, Ireland and France as well as North Devon. One tagged pup covered 1000km travelling between the four countries in its first 3 months.

A recent highlight for Sue was videoing a pup being born.  Adult female seals spend most of their 30 or so years pregnant: pupping in autumn, mating soon after but delaying implantation for several months, then pupping again in autumn and so on.

Thankfully the videoed birth seemed straightforward, not much more than an energetic stretch on the sand.  A slither, sneeze and sniff brought the pup out for the tricky part, manoeuvring to suckle and 3 weeks feeding up whilst mum fended off the importuning beachmaster. Job done, she would soon get pregnant again.

Arguably males have it easier, just locked in an eternal struggle to be top dog, the beachmaster of their patch, with exclusive access to the females.

Photo ID plays a vital part in CSG’s work. Seals can be identified by their “fingerprint" markings, which when photographed can be matched up to track the movements of individuals.

Coastwise’s Dave Jenkins submitted photos of seals at Morte Point to CSG leading Sue to identify Morte as an important haul-out site, now monitored by Dave’s local group. CSG member Kate Hockley who undertook the detective work on Dave’s photos, came with Sue to talk to us about her role and to encourage us to send in our photos when seal-watching, which after all we had heard would surely be soon. 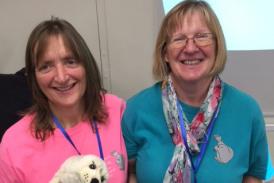 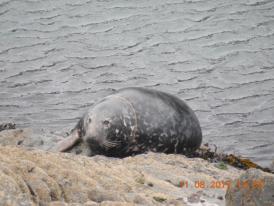 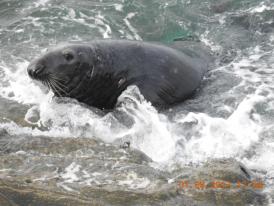