Coastwise members have been keen supporters of the Cornwall Seal Research Trust over the last few years and during their latest visit, Sue Sayer and Rob Wells told the story of Septimus Seal, whose skeleton accompanied them to Barnstaple Library.

His story started in 2016 when he was identified, but soon after spotted dead on a Cornish beach.
Sue and Rob between them recounted the story of how his body was recovered and gradually prepared for assembly and display as an educational resource.

Assembly and articulation was done professionally with the help of CSRT's own fundraising and a contribution from Coastwise, and Septimus will be used extensively over the next year or so to help further fundraising.

It is for this reason that the full story of how he came to be on display, and what the skeleton shows of his hard life, will not be expanded on....go and listen to one of the talks to learn this interesting story !

Sue and Rob combine in a very interesting and entertaining double-act to tell this story, so it's well worth getting in touch with the CSRT and finding out the next talk. 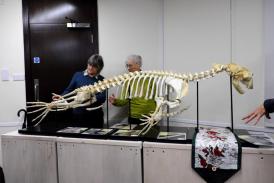