Seaweed is a lot more useful than you think.....

..........according to Dr Sarah Hodgkiss, who, as a professional Phytologist working in the field with Cybercolloids, should know.

Sarah is also a Coastwise member, and she gave other members a very informed overview of the huge potential in foodstuffs, biofuels, pharmaceuticals and other products.

The evolution of seaweed processing has moved through initial stages of sugar/starch conversion, to maco-and micralgal biorefineries.

Sarah outlined some of the chemical constituents, such as Fucoidan, a structural carbohydrate with desirable bioactive properties like anti-inflammation, anti-oxidation and benefits for the immune system.
There's also huge potential for biodegradeable film and plastics to replace current bio-resistant varieties.

The world is trying to make a protein transitionaway from traditional animal sources towards insects, fungal and other sources. Seaweed is a good candidate for development, as there's up to 30% protein in some varieties.

The major challenge here is creating the market while developing the production and processing capability to match. Processing can involve heating or use of enzymes to break down cell structures, pH regulation, clarifying and filtration.

Seaweed growth rates are comparatively low, and they have to be harvested carefully to allow continued growth, so large areas of sea will need to be used for farming. Wind Farm zones seem a natural candidate, and only 10% of UK windfarm zones could produce about 16M wet Te of seaweed, which is equivalent to about 50% of current world production. Such large-scale farming also offers a lot of carbon capture, and ecosystem services.

Overall, a fascination topic of huge potential, explained in layman's language by an industry expert.

The YouTube video of the talk  will be posted here shortly....... 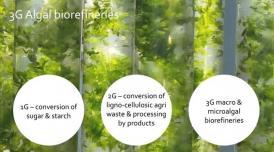 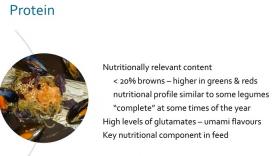