Some optimism to cling to.....

.....about the pollution of the oceans with plastic, according to ecologist Dr Heather Koldewey.

Heather gave an uplifting talk to Coastwise members on the efforts to understand and remedy the way in which plastics are littering the oceans. Major research efforts in the Philipines have shown that fishing nets, a major hazard to wildlife, can be collected, baled and sent to recyclers, with some income going to the local communities.

Heather's interest was triggered by a Smithsonian staff member, Nancy Knowlton, who realised that huge numbers of people are developing a very pessimistic view of the environment, started Ocean Optimism to counter this.

The fishing net recycling effort was spearheaded by Econyl, who can take Nylon 6 nets and recycle it to similar high-grade material, and Interface, who can make carpets from the recycled plastic.

This model has been extended to cover Carageen seaweed, which is used in many products, and which also allows some revenue earning for local communities.

The research has moved to the Chagos Islands in the Indian Ocean which has a huge MPA about the size of France.

Closer to home, a big effort has been started in London to understand the sources, and to removed the source of pollution by installing drinking fountains for reusable bottles.

Further research is now taking place on 8 major rivers of the world to understand the inland sources of plastics. Heather took part in a trip from sea to source for the Ganges, where a generally available, free, recording app called Marine Debris Tracker was used.

In conclusion, this is a huge global probem, but there are rays of hope. 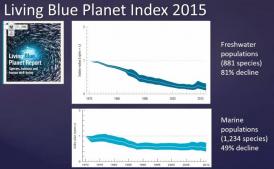 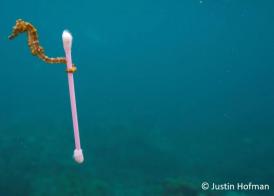