Talent and Breadth of Interest......

.....shown by Coastwise members is remarkable, and exemplified by the Autumn Programmme's opening meeting.

This featured two talks by members.

Firstly, Martin Corfe illustrated various fascinating and evocative aspects of local history with Dorothy Beera's slides of life along the Taw and Torridge.
Dorothy was instrumental in the setting up of the Appledore Maritime Museum, and she documented a bygone age  maritime life around our estuaries, as Eric Ravilious did for rurual life two decades earlier.

Martin touched on a wide variety of activities :-
The Yelland power station, now no longer there (coal and oil loading jetty, R top),
The sand and aggregate industry which used barges which could be beached for loading and unloading, and which, when loaded, appeared to be sinking as they were so low in the water (R, 1st from top)
Salmon and Mussel fishing - salmon were, and still are, caught by netting from the shore, and mussels were raked from the sand, with a device that incorporated a rake and a net (R, 2nd from top)
Dorothy also documented the Instow Ferry, the Appledore shipbuilding site and lifeboats.

Secondly, Paula Ferris showed the results of her skill (not to be underestimated) in finding colourful and exotic nudibranchs, or sea slugs, and filming them through a low-powered microscope.

Paula covered most aspects of these lovely creatures, starting with their structure and strange anatomy. She showed fascinating film clips which showed, because of the transparent bodies of some, show the gastric and cirulatory processes. Sea slugs are similar to land snails in having an abrasive radula or tongue, which enables them to eat hard materials.

The gut extends into the 'tentacles' along the back, and fills the cridosacs, or poisoned areas, which act as a colourful deterrant to predators.

They regenerate by producing huge egg masses, which, being an attractive food source for other animals, probably only lead to a few survivors. Pictured R are (3rd from top) Tergipes tergipes, and (4th from top) Facelina auriculata.

Coastwise members were highly appreciative of an entertaining and educational pair of talks.
[Pictures courtesy of Dorothy Beera/Martin Corfe and Paula Ferris] 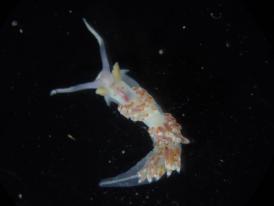 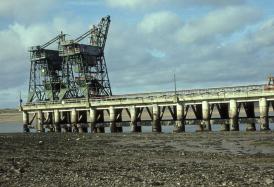 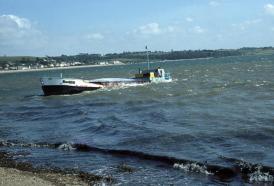 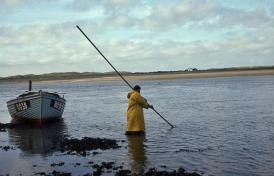 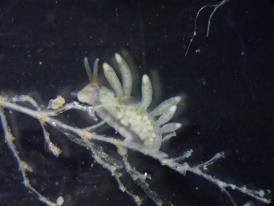