There's an awful lot of pebbles on the beach......

.....but Clive Mitchell of the British Geological Survey has a good idea what most of them are.

He spoke to Coastwise members about how to go about collecting and identifying pebbles, base on his book "The Pebble Spotter's Guide", published in conjunction with the National Trust.

As a professional geologist, his normal work is globally-based, but he retains a boyhood interest in what can be found on beaches.

He was inspired to write the book following a trip to Cromer with a journalist who was writing an article ("No stone unturned - my search for the pebble hunter's holy grail"), and it was published on 10th June 2021, having negotiated an increase in the words allowed with the publisher - an unusual state of affairs !

The definition of "Pebbles" is surprisingly wide, and can include cobbles that are too big to lift. There are some ground rules to observe. Some local authroities have imposed bans on removing pebbles, e.g. Crackington Haven, and removal of material from cliffs, and breaking pebbles open, acn be very dangerous.

There a great deal of useful information on the BGS 'Geology of Britain viewer website (https://mapapps.bgs.ac.uk/geologyofbritain/home.html) about what the surface and underlying rocks are, but the are pitfalls: pebbles may have been dumped as ship's ballast, and some may have been transported from elsewhere during glaciation episodes in the geological past.

Pictured R, courtesy of Clive Mitchell, the cover of his book, the BGS geology identification site, Rhomb Porphyry - from near Oslo in Norway, but transported to a Norfolk beach by a glacier, and a fossil sea urchin.

A YouTube video of Clive's talk can be found here :- 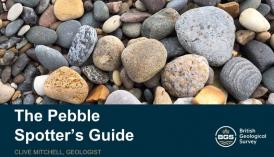 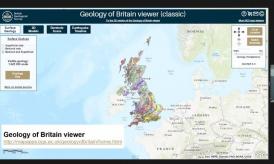 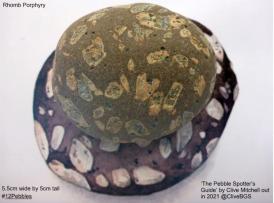 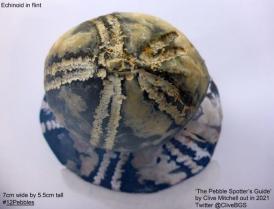