What's been happening in the Bristol Channel.......

......to fish and crustaceans is an open book, which he shared shared with Coastwise members, to Dr Peter Henderson of the Pisces Consultancy, and a Senior Research Fellow at Oxford University.

He's been sampling the marine life at CEBG colling water intakes for 40 years, and has built up a very rich and probably unique, data set on species diversity and movements.

One of the most interesting headlines from his analysis of the data is that there has been a very steady level of species richness (R, 2nd from top), despite all the ecological changes that have occurred over the last 40 years.

This population is composed of what he terms residents and tourists, or the core population augmented by transient species (R, 3rd from top). At any one time there are about 15 species.

He's looked at the environmental drivers, including temperature, salinity and sediment levels, which are affected by not only the tidal flows, but also the inflows from the various rivers contributing to the estuary system.

Peter picked out some interesting trends. For example, numbers of migratory eels, which are Catadromous, or moving from fresh to salt water, have dropped significantly, probably due to interference with migration, introduction of disease, and excessive elver fishing.

The importance of understanding the ecological processes is important. For example, the top predator is the Conger Eel which feeds mainly on whiting. Their survival chances are increase by sheltering underjellyfish when young, so the interdependencies of the various species are important.

Peter was also able to present authoritative data on other species such as sole, sprats, brown shrimps and plankton, all building up a fascinating, and rather unexpected, picture of this major estuary system, and one which was greatly appreciated and enjoyed by Coastwise members.

Dr Henderson has given permission to add the recording of his talk, which can be accessed here..... 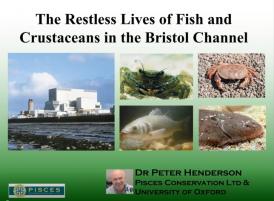 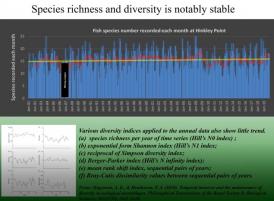 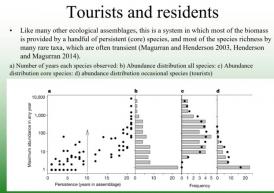 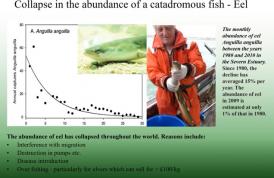