The showers held off long enough to make our fourth public summer shore safari, organised by Marjorie Heath, enjoyable for the 40 or so who joined us at Hele Bay on 27th July.

Crabs and small fish were as popular as ever and. plenty were found in the shallow pools and under the low-shore boulders which we handled with care to ensure the well-being of the animals.  Under the supervision of  Sue Austin, a few of the smaller ones were put into tanks for better viewing, predators and prey being kept separate.

A bristle worm provided the most interesting behaviour of the day. Placed in a bucket it thrashed about furiously, before shucking off its lower half, both parts continuing to thrash around.  Was it sacrificing its tail to distract a predator from the business end (autotomy), or, less likely, releasing its reproductive apparatus (epitoky)?  The spectacle certainly provoked much interest.

A good find rewarded a short scramble up the cliff, the sight of several elegant fan worms, Bispira volutacornis, in tubes suspended from an overhang . Note the squiggly lightbulb sea squirt alongside, only spotted later in the photograph.

Our thanks to Cat and Myles from the Coastal Creatures Project for their support and all the participants who were not put off by the weather and helped make the event fun.

Pictured R from Top, scrambling about at Hele, Base Camp with specimens in tanks, Fan Worms (Bispira volutacornis) - Lightbulb Sea Squirt (Clavelina lepadiformis) just to the R of the fan worms. 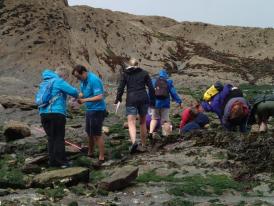 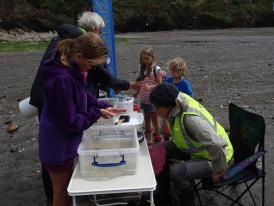 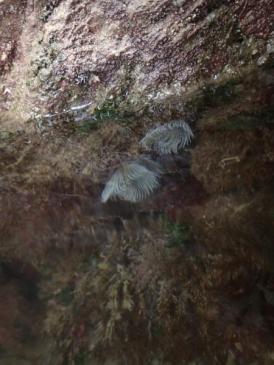